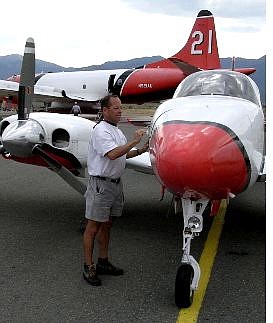 Photo by Karl HoreisUnited States Forest Service lead plane pilot Greg McDonald of Ogden, Utah, secures a compartment Friday on the twin-engine Beechcraft he uses to escort heavy air tankers like the P-3 Orion seen in the background to their drop zones.