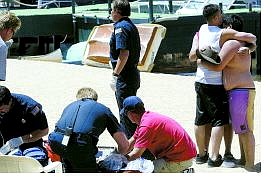 Dan Thrift/Appeal News Service Friends and family console each other while emergency personnel perform CPR on the younger of two victims involved in a personal watercraft accident Monday at Lake Tahoe.