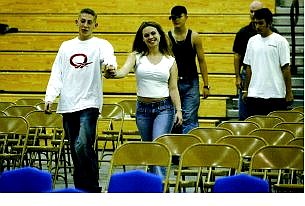 Cathleen Allison/Nevada Appeal Brad Dabe and Tiffany Throne, both 18, practice their entrance into the gym in preparation for Silver Stage High School&#039;s first graduation. After being open for two years, the high school will graduate its first class tonight.