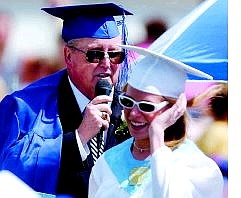 Glen Adair speaks to the graduating class after Charity Ricks and Maria Urbina presented their principal a cap and gown on his last official day of duty during graduation ceremonies on the football field Saturday. BRAD HORN Nevada Appeal