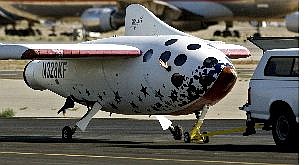 SpaceShipOne, with pilot Michael W. Melvill waving from a porthole, is towed off the runway after a trip to suborbital space at Mojave, Calif., airport Monday. Associated Press