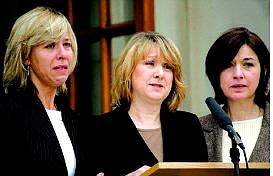 Iraq kidnap victim Margaret Hassan&#039;s three sisters, from left to right, Catherine Fitzsimons, Deidre Fitzsimons and Geraldine Fitzsimons make a statement to the media in Dublin, Ireland, on Tuesday in an appeal for her release. Associated Press