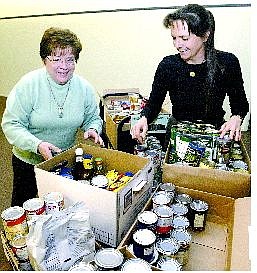 Cathleen Allison/Nevada Appeal Carson City Library staff members Gerry Pearson, left, and Elaine Werlinger sort through some of the food donated to the library in exchange for overdue book fines. The Food for Fines drive continues until Nov. 24.