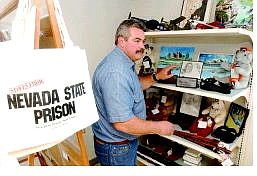 Rick Gunn/Nevada Appeal Nevada State Prison Hobby Store Manager Joseph Buchanan points out some of the products for sale during the grand opening of the NSP Hobby Craft Store on Friday morning.