Vehicles thrashed, no one injured in Edmonds wreck 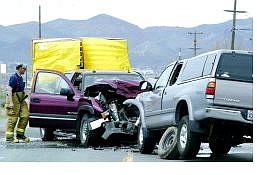 Cathleen Allison/Nevada Appeal No one was seriously injured in this two-car accident on Edmonds Drive north of Koontz Lane on Wednesday afternoon.