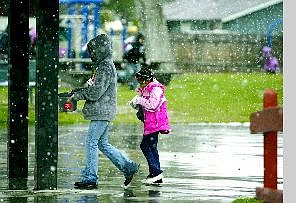 BRAD HORN/Nevada Appeal Amanda Barnes, left, and Linda Johnson, 9, pick up cigarettes butts at Mills Park on Friday during a snowstorm. The Bordewich-Bray Elementary School third-graders teamed up with high-school students as part of the Kick Butt Campaign, sponsored by the anti-tobacco youth group, RESIST.