Fifth Street trees to be removed for freeway 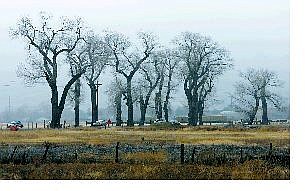 The cottonwood trees line the East Fifth Street between Saliman Road and Edmonds Drive are scheduled to be cut down this weekend. The trees, which are estimated to be around 100 years old, were determined to be a safety hazzard. Chad Lundquist/ Nevada Appeal