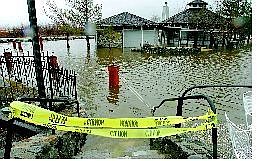 Shannon Litz/Nevada Appeal News Service Walley&#039;s Hot Springs Resort flooded near the gazebo Saturday. In the Carson Valley, Genoa and the Foothill area were hit hardest by the storm.