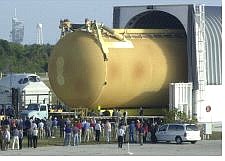 The new external fuel tank for the shuttle Discovery is wheeled out of the barge on the way to the Vehicle Assembly Building at Kennedy Space Center in Cape Canaveral, Fla., Jan. 6. Associated Press