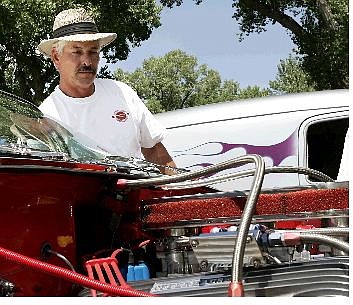 Chad Lundquist/Nevada Appeal Left: Randy Tippit, next to his 1960 Chevy Impala, at the Silver Dollar Car Classic at Mills Park on Sunday. Tippits car won the Warren Engine Company Volunteer Fire Department Award. Above: The chrome was well polished on this 1933 Ford Coupe owned by Byron Hisey of Newman, Calif. the coupe won the People&#039;s Choice award at the show.