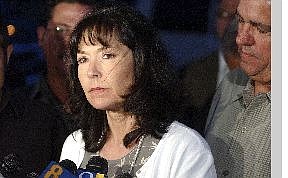 Pam McCoy, mother of murder victim Brian Pierce, listens to a question from the press after making a statement about the postponement of the execution of her son&#039;s killer Robert Lee McConnell. McConnell was to receive a lethal injection at the Nevada State Prison on Thursday evening. Rick Gunn/Nevada Appeal