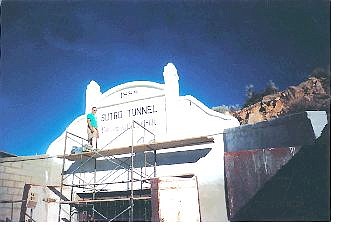 Photo by Carol Clifford Virginia City resident and Mark Twain Bookstore owner Joe Curtis hand lettered the portal facade on July 29, 2001. The 1888 date refers to the original date the facade was erected. The tunnel was completed on July 8, 1878.