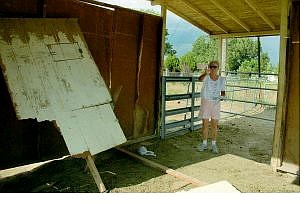 Kevin Clifford/Nevada Appeal Carolyn Garrett explains how her daughter&#039;s barn looked before it was suddenly devastated by a shock of wind that tore through her backyard Friday. The shock of wind destroyed one barn and caused minor damage to other structures.