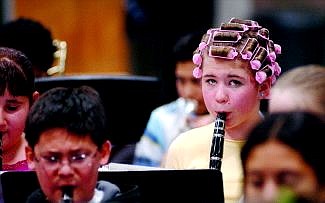 Rick Gunn/Nevada Appeal Haley Marriot, 11, of Eagle Valley Middle School was dressed in pajamas and curlers for this year&#039;s practice of Band-o-rama Wednesday morning. The all-school ensemble struck up their tune at 7 p.m. that night.