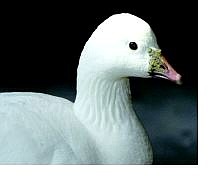 A rare Ross goose will be released by the Lake Tahoe Wildlife Care Center on Friday. The goose was blown off course by the latest winter storms and took refuge at the Sierra-at-Tahoe ski resort. Jim Grant Nevada Appeal News Service