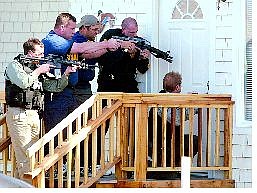 Belinda Grant/Nevada Appeal News Service Douglas County Sheriff&#039;s deputies prepare to enter a home at the corner of Waterloo Lane and Highway 88 at about 3:30 p.m. Thursday. They were looking for drug trafficking suspect David Gomez, but he wasn&#039;t in the house.