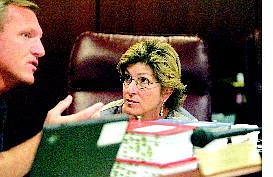 Brad Horn/Nevada Appeal Assembly Speaker Richard Perkins, D-Henderson, and Assemblywoman Chris Giunchigliani, D-Las Vegas, talk during a Ways and Means Committee meeting at the Nevada State Legislature in Carson City on Saturday morning. Both the Senate and the Assembly met in chambers until about 3 a.m.