Adele's brings touch of Nevada to the Big Apple 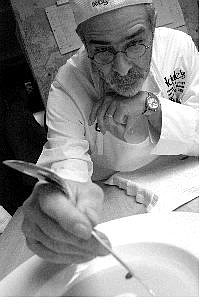 Adele&#039;s owner, Charlie Abowd, perfects the placement of the garnish on the pur&#233;e of butternut squash during a meal prepared for the James Beard House Nov. 10 in New York. Photo Contributed by Mitzi Morris