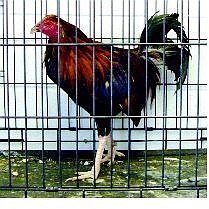 This is one of several roosters, with their combs cropped, found at a home in Mark Twain where Animal Control officials believe cockfights had been held. The birds were taken into custody and charges are still being considered. cathleen allison nevada appeal