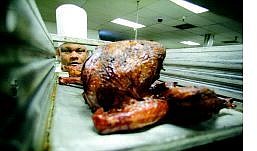 BRAD HORN/Nevada Appeal Charlie Evans Jr. peers through smoked turkeys in the kitchen at the Carson Nugget on Tuesday. Evans, the banquet sous chef, said the kitchen staff is about 65 percent finished with preparations for Thursday&#039;s free Thanksgiving dinner, preparations for which, he said, are ahead of schedule compared to last year.