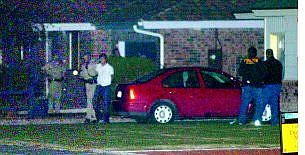 A man was arrested in connection with a robbery at the Bank of America in Minden at about 5:30 p.m. Tuesday. He was taken into custody in the 1600 block of Belarra Drive in the Mackland subdivision south of the bank. Belinda Grant/Nevada Appeal News Service