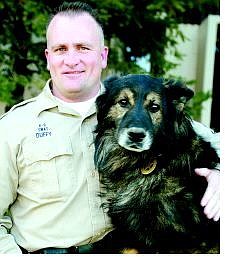 Douglas County Sheriff&#039;s Sgt. Joe Duffy with his dog, Kilo, who is credited with tracking down a suspect in a Minden bank robbery. Shannon Litz/Nevada Appeal News Service