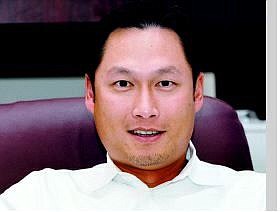 Chad Lundquist/Nevada Appeal Ellick Hsu, elections deputy for the Secretary of State&#039;s Office, sits at his desk recently at the Capitol. Hsu is providing answers on the new statewide voter registration system being put into place by elections clerks.