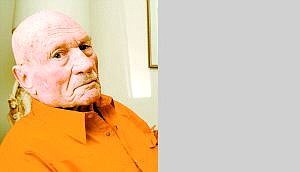 Rick Gunn/Nevada Appeal file photo Art Bernard who served as a Nevada State Prison Warden from 1951-59 spoke with the Nevada Appeal about his time as a warden from his home in Carson City in this photo from 2002.