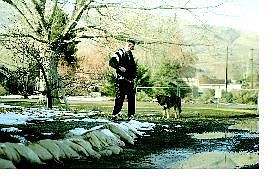 John Lubich surveys the flood damage to his Mark Way front yard with his dog Ginger on Thursday. Flood waters rose to five feet in his backyard on Saturday. BRAD HORN/ Nevada Appeal