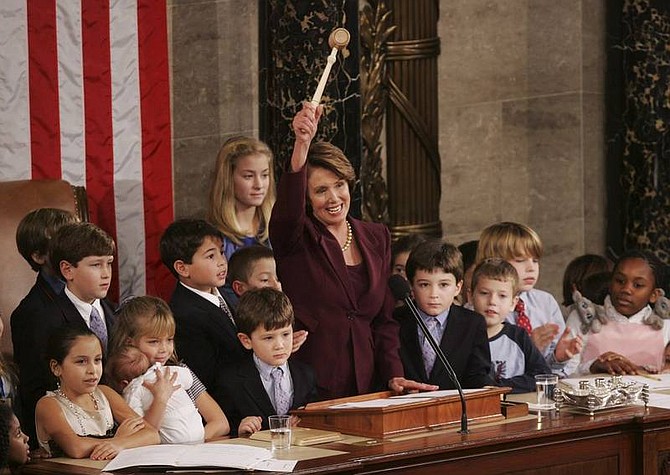 AP Photo/Susan Walsh Newly elected Speaker of the House Nancy Pelosi, D-Calif., holds up the gavel surrounded by the children and grandchildren of members of Congress in the U.S. Capitol in Washington, D.C., on Thursday. The blond girl behind Pelosi in the blue dress is Emmy Heller, 11. When Pelosi called the children in the chamber to join her at the podium for a chance to touch the gavel, Emmy quickly went down from her seat. Her dad Dean Heller, R-Nev., says one of the representatives behind him joked, &quot;Hey, don&#039;t let her go down there.&quot; Heller told him, &quot;it&#039;s OK. I told her to go get the gavel and bring it back.&quot; Heller&#039;s parents, Janet and Jack Heller, and his brother Bryan Heller were seated in the gallery. An additional 12 family members watched the proceedings on the TV in Dean&#039;s office.