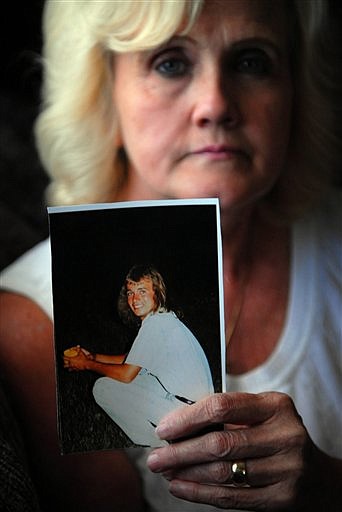 FILE - This Sept. 12, 2007 file photo shows Marge Shipley holding a photograph of her son Carl Lackl, Jr., 38, who was fatally shot in front of his house in July. It is believed that he was killed to prevent him from testifying in a Baltimore City homicide trial in which he was the key witness. Authorities say Lackl was gunned down after the suspect ordered the hit from a cell phone behind bars. State officials appealed to members of Congress on Wednesday to give states a new tool to control illegal cell phone use by prison inmates and quickly ran into protests from the phone industry. (AP Photo/Baltimore Sun, Chiaki Kawajiri, File) **MANDATORY CREDIT, NO SALES, BALTIMORE EXAMINER AND WASHINGTON EXAMINER OUT**