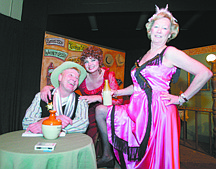 Brad Horn/Nevada AppealThe villainous Sheriff Amos Crutchwaffle, left, played by Mark McGyver, Belle the owner of the saloon, played by Jan Duke, and April the bar maid, played by Sue Volz, rehearse for the Misfits Theater Group&#039;s performance of &quot;Showdown at the Phingerdoo.&quot;