On the Trail: Back with bike to Korean Veterans Memorial 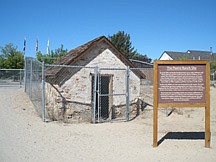 Third shows the storage house on the site of the Korean Vetrans Memorial Park, which is on the old ranch side.