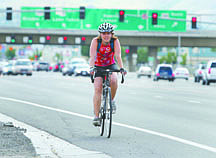 Jim Grant/Nevada AppealNew legislation will give increased protection to cyclists. A new law requires drivers give bicyclists at least three feet of space.