Pedaling his students to the moon 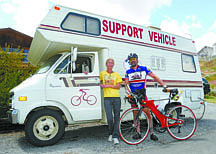