Budget talks drag on into another night 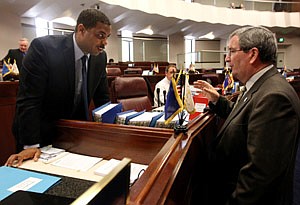 Senate Majority Leader Steven Horsford, D-North Las Vegas, and Minority Leader Mike McGinness, R-Fallon, talk on the Senate floor Monday, May 30, 2011, at the Legislature in Carson City, Nev. Lawmakers continue to work with the governor on the state budget, including talks to extend $679 million worth of taxes that were set to expire Jun 30. (AP Photo/Cathleen Allison)