Neighborhood haunted house back with a vengeance to help needy 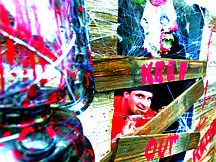 Nevada Appeal File PhotoCarson City resident Jason Stinson is creating a haunted house at his home on Broadleaf Lane that will be open to the public on weekends starting Oct. 14. Admission is one canned food item or piece of winter clothing per person, which will benefit local organizations.