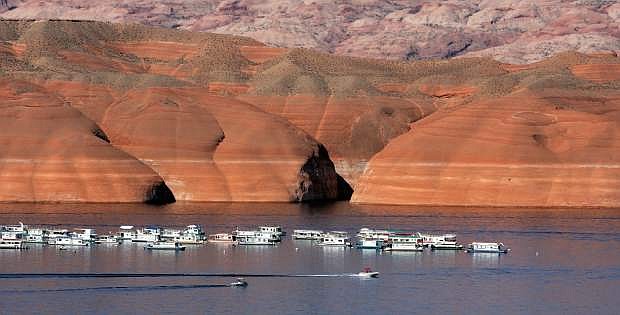 FILE - Houseboats are moored on Lake Powell in Bullfrog, Utah, in this July 12, 2006 file photo. The lake&#039;s former, higher levels are marked by the bathtub-like rings on the embankment, rear. After back-to-back driest years in a century on the Colorado River, federal water managers are announcing a historic step to slow the flow of water from a massive reservoir upstream of the Grand Canyon to the huge Lake Mead reservoir behind Hoover Dam near Las Vegas. The U.S. Bureau of Reclamation is announcing Friday, Aug. 16, 2013, that the move to keep more water in Lake Powell will lower the water level of Lake Mead by about 20 feet in 2014. (AP Photo/Douglas C. Pizac, File)