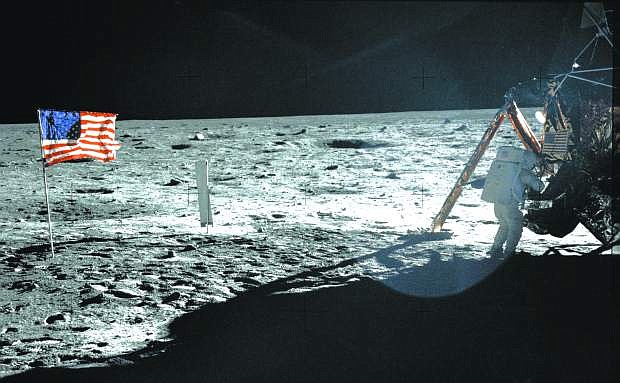 In this July 20, 1969 photo provided by NASA shows Apollo 11 astronaut Neil Armstrong on the lunar surface. Apollo 11 astronauts trained on Earth to take individual photographs in succession in order to create a series of frames that could be assembled into panoramic images. This frame from Aldrin&#039;s panorama of the Apollo 11 landing site is the only good picture of mission commander Neil Armstrong on the lunar surface. The family of Neil Armstrong, the first man to walk on the moon, says he has died at age 82. A statement from the family says he died following complications resulting from cardiovascular procedures. It doesn&#039;t say where he died. Armstrong commanded the Apollo 11 spacecraft that landed on the moon July 20, 1969. He radioed back to Earth the historic news of &quot;one giant leap for mankind.&quot; Armstrong and fellow astronaut Edwin &quot;Buzz&quot; Aldrin spent nearly three hours walking on the moon, collecting samples, conducting experiments and taking photographs. In all, 12 Americans walked on the moon from 1969 to 1972. (AP Photo/NASA, Buzz Aldrin)