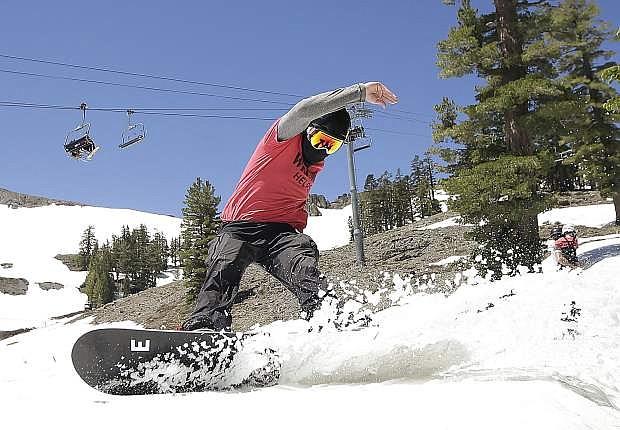 FILE - In this July 1, 2017 file photo, a snowboarder cuts throughout the snow at the Squaw Valley Ski Resort in Squaw Valley, Calif. A proposal to connect two Lake Tahoe ski resorts with a 2.2-mile-long (3.5-kilometer-long) gondola has moved closer to final approval. Placer County&#039;s approval of the project on Tuesday is one of the &quot;last crucial steps&quot; toward linking Squaw Valley and Alpine Meadows, said Ron Cohen, president of Squaw Valley Alpine Meadows. The Sierra Sun reports the gondola with eight-passenger cars would transport up to 1,400 people an hour on a 16-minute trip between the bases of the co-owned, neighboring resorts northwest of Tahoe City, California. (AP Photo/Rich Pedroncelli, File)