The Nevada Traveler: Marietta: Famed for burros and borax 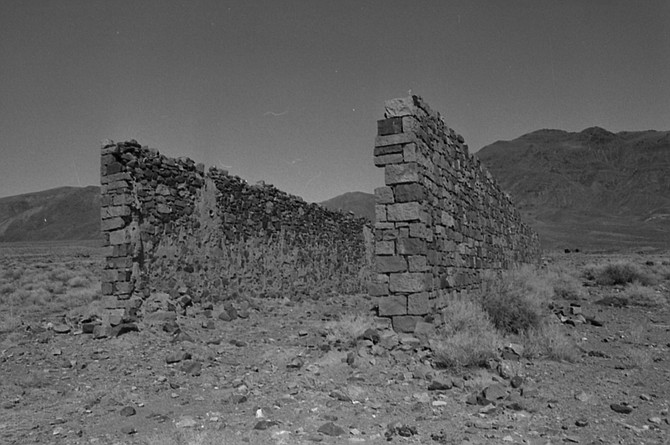 These stone walls are all that remain of a general store owned by Borax Smith and his brother in the near-ghost town of Marietta.

Scraggly tufts of sagebrush grow around a handful of rough-cut stone foundations and walls. In the distance, there is the wide expanse of a dry, alkali lakebed. Some days, wild burros wander through the scene. Welcome to the old mining camp of Marietta.

Founded in the late 1870s, Marietta was not a typical central Nevada mining camp, founded on gold or silver ore, but rather it prospered because of rich deposits of borax and salt.

Originally called Teels Marsh, the area was first developed in 1867 when salt was mined in lakebed and transported by camel train to Virginia City’s booming mines (at the time, salt was an essential element needed to process silver and gold ore).

In 1872, Francis M. Smith, who would later become renowned as “Borax” Smith, was working the salt fields in nearby Columbus and spotted the borate potential of the marsh. He and his brother took samples from the dry lakebed, which contained large amounts of borax, and staked claims to nearly the entire area.

Within months, full-scale borax mining began as the Smith brothers and other miners began constructing borax processing facilities at the southeastern end of the marsh. Records indicate that wagon trains hauled the material all the way to a train station at Wadsworth, about 115 miles north.

The Teels Marsh borax field was not only an important discovery for Nevada but allowed the Smiths to create the Teels Marsh Borax Co., a predecessor to the Pacific Borax Salt & Soda Co., which, in the late 19th century, would control the world’s borax market.

Smith’s genius was that he recognized the value of borax if marketed correctly. Prior to his efforts, borax was mined in Europe and used primarily in pharmaceuticals.

Since he controlled huge deposits, Smith began promoting and advertising the substance as an effective abrasive cleaner. He created an immense market for his products and, in the process, became one of the early 20th century’s most successful industrialists.

Smith eventually would move farther west to larger borax (also known as colmanite) discoveries in Death Valley and become famed for his 40-mule teams that carried the ore out of the Death Valley area. Naturally, he expertly marketed his mule trains so that they and Borax became household consumer product names well into the mid-20th century.

The town of Marietta was established in about 1877 and soon had a post office, a newspaper, a company store owned by Borax Smith, several other businesses and more than 150 residents. A stamp mill was erected in the first year to help in the ore processing.

Within a few years, the town had a row of buildings, including a dozen saloons on its main street as well as the large stamp mill and several dozen wooden and rock houses.

The discovery of the larger borax deposits at Death Valley eventually signaled the end of Marietta.
By the 1890s, the borax operations closed and the town quickly slid into oblivion.

The drive to Marietta allows visitors to view the real Nevada outback. The road winds through rolling sage-covered foothills before dropping down into the flat, treeless, alkali valley that is the location of Teels Marsh and, at the southeast end of the marsh, the ruins of Marietta.

The town’s signature structure is the stone remains of the Smith store. You can still find three of the four walls of the store standing, with a second structure, perhaps a later addition, directly east of the walls.

Just east of the store are the foundations and remains of the mill and, buried in the sagebrush, a handful of neglected, rude mounds can be found in the original cemetery.

Additionally, near the main street there are a handful of wooden farmhouses, including one with a fairly intact stone corral and walls that appeared to have been insulated with old cardboard Crisco boxes. Another small, one-story wooden structure with a frontier storefront and a decided tilt, is still identified as the post office.

A few mobile homes and ranch houses surround the ruins and indicate that Marietta still has a few residents.

In the early 1990s, the area around Teels Marsh and Marietta was designated the nation’s first official wild burro range. The 68,000-acre range is home to about 85 burros that can freely roam the marsh and surrounding hills. There are designated viewing areas above the marsh.
Marietta is located 56 miles southwest of Hawthorne via U.S. 95, then west on State Route 360 to a marked and maintained dirt road. For more information about the burro sanctuary, go to www.blm.gov/visit/marietta-wild-burro-range.