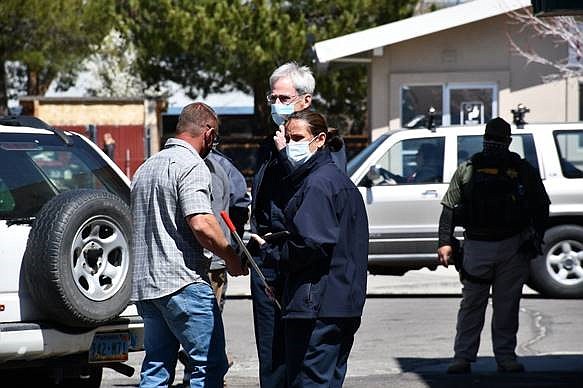 UPDATE, April 15, 10:14 a.m.
Owners of the Frontier Motel on North Carson Street will need to prove the property's business license should not be revoked by Carson City.
The Board of Supervisors on Thursday scheduled a show cause hearing for May 20.
City code enforcement found serious health and safety issues at the motel, including bedbugs, rodents, and rooms without hot water or flushing toilets. Initially, several rooms were closed down, but all residents must vacate the premises by 7 p.m. Thursday.
Sheriff Ken Furlong told the board that the motel drew the attention of law enforcement and code enforcers after a series of deaths were reported there in the last couple months.
INITIAL STORY
On April 12, 2021, a planned health and safety inspection was conducted at the Royal Inn, also known as the Frontier Motel, located at 1718 N. Carson Street, by Carson City Health and Human Services, Carson City Emergency Management, Carson City Fire Department, Carson City Code Enforcement, and the Carson City Sheriff’s Office.

As a result of the day-long inspections, the City has issued an emergency order today to close the motel based on concerns for the health and safety of the motel occupants and the general public. Occupants will have until 7 pm on Thursday, April 15th to vacate the premises.

Throughout the property, City inspectors found rooms infested with mice, rodent fecal matter, bedbugs, structural failures, unpermitted construction, exposed electrical wires, lack of hot water, unsecured doors, broken windows, and general debris and trash within the rooms. Seven of the 56 rooms on the property were closed to occupancy immediately upon inspection due to unsafe living conditions. Health officials state there is the potential threat of hantavirus infection due to the infestations.

“Every effort will be made to ensure the health, safety, and comfort of the occupants affected, numerous agencies have been called into action ensuring food, clothing, and a shelter will be provided during their displacement,” said City Manager Nancy Paulson.

An item is on the April 15th Board of Supervisors agenda on whether to serve a notice of an order to appear and show cause why the motel’s business license should not be suspended, cancelled or revoked. This item was scheduled prior to the inspection due to a high volume of emergency calls and criminal activity at the location over the last few months. The public can participate or watch the meeting on the City’s website at carson.org/meetings.