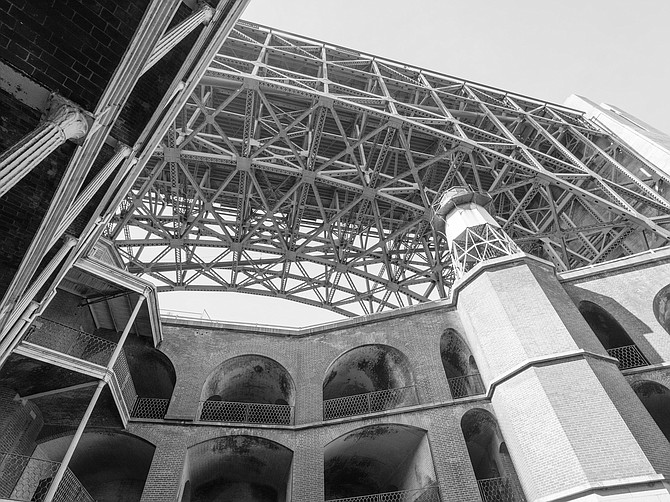 View of Fort Point, located underneath the Golden Gate Bridge in San Francisco.

Sitting in the shadow of the Golden Gate Bridge, San Francisco’s Fort Point is one of the city’s less well-known attractions.

Built between 1853 and 1861 on the site of an earlier adobe fort known as El Castillo de San Joaquin, which had been erected by the Spanish between 1793 and 1794, Fort Point was constructed to protect the City by the Bay from possible foreign invaders (apparently a concern after the Gold Rush of 1849).

The three-level fort cost about $2.8 million and was constructed by the U.S. Army to be part of a three-point system of defense, with other forts proposed for Lime Point (on the north side of the Golden Gate Bridge) and Alcatraz Island.

The fort was designed to be imposing, with outer walls that were 5 to 7 feet thick and 90 arched gun rooms. It incorporated granite from China as well as more than 8 million bricks.

The fort remained on armed alert during the Civil War with the U.S. Army placing 55 guns and 11 mortars within its confines. Later, the Army installed massive Rodman guns, which were huge cannons that could reach targets as far as three miles away.

Unfortunately, by the time it was completed, the fort was obsolete. The Civil War showed that newer, more powerful cannons developed during the war could easily destroy forts of its type.

By 1876, the fort was downsized, with many of the guns removed, and by 1886, only a caretaker watched over the premises. During the next few decades, the fort was used occasionally as military barracks.

During the 1906 San Francisco earthquake, the fort sustained some damage; its south wall pulled 2 to 6 inches away from the rest of the fort and the building was largely abandoned.

However, in 1914, the facility was refurbished for possible use as detention barracks, using inmate labor from Alcatraz. Unfortunately, Congress ultimately decided against authorizing it to be used for that purpose and reconstruction was halted (although it did result in the repair of the south wall, which saved the fort from collapsing).

In the 1930s, planners of the Golden Gate Bridge proposed demolishing the fort, then decided it was a valuable national treasure and redesigned the bridge to span above the fort.

During World War II, the fort was again used by troops and a few anti-torpedo boat guns were placed atop its upper tier. After the war, however, the fort was decommissioned again.

In 1968, legislation was finally introduced to create the Fort Point National Historic Site. The bill, which transferred control of the fort to the National Park Service, was signed into law in 1970.

Since then, the fort has been partially restored and interpretive displays placed in various sectors. Additionally, guided tours of the facility, cannon drills, and other special programs became available.

Today, visitors will find the fort at the northwest end of the San Francisco Presidio military complex, tucked underneath the Golden Gate Bridge, just above sea level.

It remains an impressive sight: three stories of nearly solid red-brick walls, dotted with tiny cannon windows. The only entrance to the fort is a smallish sallyport on the south side.

Inside, there is a high, narrow courtyard, shaded much of the time. The arched rooms, heated only by small fireplaces, are at once elegant, because of the fine brickwork, and spartan. It is obvious this was a place built for defense and not comfort.

A well-stocked gift shop contains a fine collection of history books, posters, maps and other items.

To reach the fort, which only recently reopened to visitors due to the COVID-19 pandemic, head to the north end of San Francisco into the Presidio. Drive west on Mason Street, then northwest on Long Avenue to Marine Drive, which leads to the fort.

Fort Point National Historic Site is part of the Golden Gate National Recreation Area. For hours and information, check out the website at www.nps.gov/fopo/index.htm.