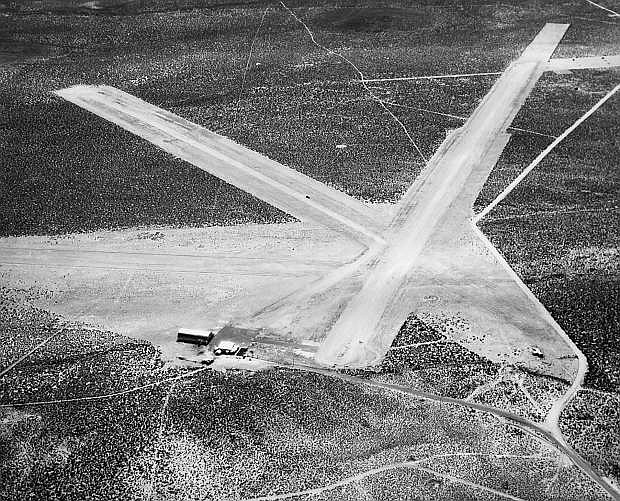 Saturday
145 years ago
Business at and around Tahoe this season promises to be more lively than heretofore. There will be more lumber cut and transported to the flume than in any one previous year; and Captain Bray will saw and haul to town more lumber than he has hitherto done in any one season. The snow between here and the lake is still deep in places, sleighs being used for a short distance, but still travel goes briskly on.
140 years ago
Chalet, the ventriloquist, who appeared at the Opera House on Monday and Tuesday last, receives $200 per week for his twenty minute performance of an evening.
130 years ago
Now is the time to pick out your fishing pole.
120 years ago
An Important Find. Word comes from Termo, a station on the N.C.&O. Railroad near Susanville, that oil has been struck there of good quality. It is in the form of flowing well. This point is about 110 miles from Reno on this site of the Sierra range of mountains.
100 years ago
At 7:30 Friday night the band from Stewart Institute will start off the carnival being held on the Capitol grounds by the Relief committee for the purpose of adding to their funds to meet the necessities of starving and helpless people.

Return of the Road Viewers. — Yesterday Mr. McTarnahand the other gentlemen who went out with him on a tour of Inspection of his proposed road to Columbus, returned to this city. They looked somewhat dusty as they passed up Carson street, and they were a little bronzed withal, but it is believed that they will get the dirt washed off their persons and be able to report to our citizens to-night what they have seen about the road.

Distinguished Arrivals. On Sunday’s lightening arrived here a man from China with an American wife. The man is about five feet high, while his better half stands nearly six feet in her stockings, and her muscular development is of character to satisfy her husband that any unseemly conduct on his part would be an unwise undertaking. The couple are quartered in the perfumed precincts of Chinatown.

The Chitaquans. Reno has the banner Chitaquan circle east of the Sierra Nevadas, numbering, all told, forty members, nearly all of who have pursued the reading required during the year in its entirety. “The Sagebrush” circle was organized last October and had an eventful growth. — Journal

The Murder Trail. The trial of an Indian known as Mike fo the murder of Wm. Moore on the Carson river is in progress in Genoa. The main witness against him is another Indian by the name of Charles Green. He testified that he saw Mike kill Moore in his cabin door and afterwards drag the body into the cabin and burn it.

The Wrong Dope. Contractor Sellman believes that he has the wrong dope on building weather. When he lays off his crew the weather warms up and everything is fine. He decides to go ahead, rounds up his crew and spring sneaks back to winter.

Another State Prison Recruit. Deputy Sheriff John G. Irwin of Esmeralda county yesterday brought in the last of the bullion robbers and delivered him to the State Prison. His name is Jose Estrada, and he is under sentence of twenty-five years. His two companions in the robbery, James Wallace and Manuel Chiari, pleaded guilty and where sentenced for ten years each.

The fact that a well defined copper lode, carrying with it large percentage of gold and silver, exists in the mountains a little west of Genoa, is enlisting the attention of mining men, who will soon induce the embarkation of extensive capital to demonstrate that investments in that quarter are productive.

Tickets are out and selling rapidly for the Tammany Day Dance to be given by the Improved order of Red Men on Tuesday, evening, May 12th.

To Whom it May Concern. Carson, April 26th, 1901. For the past two years I have been worried by the inmates of the Orphan’s Home, in a way that is almost beyond human endurance and as I have made numerous complaints to the officers in charge without getting relief or satisfaction, I will from this on try to protect my family and my property with the shotgun. Parents and guardians having boys at the institution should not take this too lightly for I mean business. Peter F.

Yesterday at least ten cars made the trip to various points about Lake Tahoe, using the Kings canyon road, which is in fair condition as far as the summit, but from that point to Spooners considerable work will have to be done, as the snow has melted and cut runs in the roadbed.