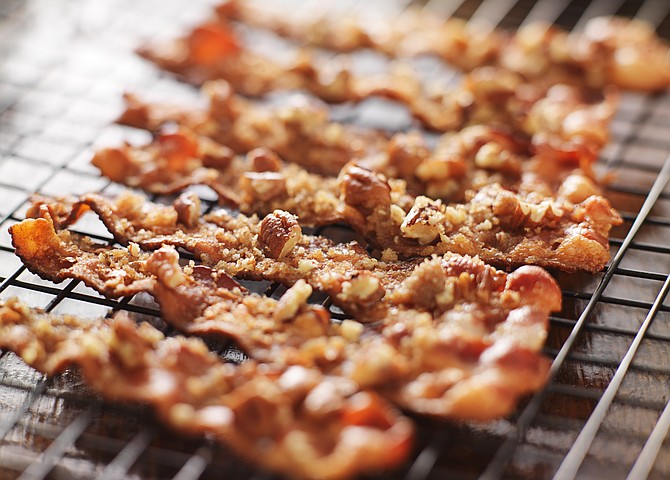 David Theiss says candied bacon is a crispy, salty, sweet treat that everyone will love. Crumbled over a salad, great with waffles or French toast or just a tasty snack.

In 1941 during World War II our country was challenged to come up with many alternate ways of living and thinking, and food was one of them.

While food was being sold in rations, gardens were incredibly popular as well as raising small animals at home (chickens, for eggs and meat, rabbits, etc.). This was a must, especially when it came to feeding large families.

Americans also had to deal with ration cards and used them to take their meager share of household staples including meat, dairy, coffee, sugar, dried fruits, jams, jellies, lard, shortening, and oils, just to name a few. Cars, tires, gasoline, fuel oil for heating, fire wood, and shoes were just a few of the everyday shortages they had to overcome.

In this unpredictable world we live in today, although nothing like war time, we find it very frustrating that the things we are used to being accessible are just not available as much or price prohibitive.

If I were a cynical man I would say it just sounds like a good reason to charge the general public more money for everyday items. But being a business owner, shortages and huge price increases are a real thing we face. Reasons for such are always blamed on supply chains, manufacturing, distribution, all true, and are legitimate problems we all face, let alone labor shortages have affected us all with everyday items. And yet this country has gone through a lot worse.

A while back I was reading about the great bacon grease drives that took place during the war. A committee was even created for it: The American Fat Salvage Committee. It was a war effort to collect grease to aid in making bombs for the war.

Hummm? I thought how that delicious bacon grease could make a bomb? Glycerin I’m told.

So, women at that time would collect the bacon drippings in a can and when it got full they took it to the butcher and he bought it back for 4 cents a pound. Although the program was not participated in wholly, as women kept the grease because butter was in short supply. A lot was sacrificed at that time, a lot of the time people just went without. I thought such a strange item, bacon grease, became so important – our problems today are minuscule by comparison to 1941.

My recipe today is about just those items they had such a hard time getting: Bacon and brown sugar used to make a crispy, salty, sweet treat that everyone will love. Crumbled over a salad, great with waffles or French toast or just a tasty snack. Enjoy!

Place a wire rack on a foil lined baking sheet. Arrange the bacon on the wire rack and sprinkle with the black pepper. Lightly pat the brown sugar on top of the bacon to create a thin layer.

In a preheated oven to 325 degrees, transfer the baking sheet to the oven and bake for 25 minutes or until the brown sugar has melted and the bacon is crisp.

Remove from the oven and allow to cool for 10 minutes.