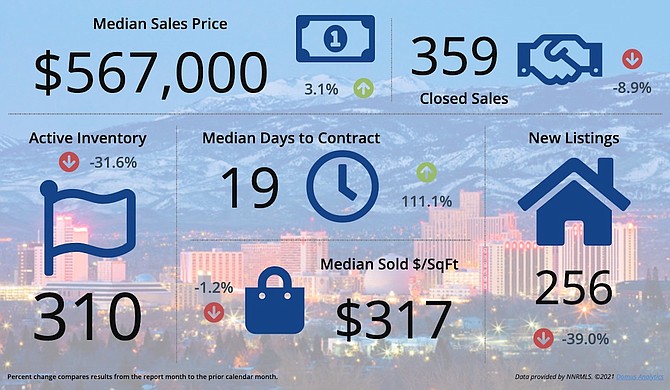 An overview of November 2021 real estate stats for the Reno/North Valleys market, compared to the previous month.
Courtesy: Reno/Sparks Association of Realtors


The median price for a single-family home in Reno jumped to a record-high $567,000 in November, according to the Reno/Sparks Association of Realtors.

It’s an increase of 16.9 percent from last year and a 3.1 percent increase from the previous month for the Reno market, which includes North Valleys, according to RSAR’s November 2021 report, released Dec. 10.

In the Sparks market, which includes Spanish Springs, the median sales price was $500,000 in November, an increase of 22.3 percent from last year and up less than 1 percent from October.

Meanwhile, the number of closed transactions totaled 533 in November across Reno/Sparks, “reflecting the typical seasonal slowdown in home sales,” according to the report, which also notes that the current inventory of 400 homes for sale represents “a very tight market.”

“Newly listed homes are going under contract in an average of 17 days,” Gary MacDonald, 2021 RSAR board president, said in a statement. “Buyers need to be sure they have good advice from a Realtor and are well-prepared to move quickly to make an offer that will be accepted.”

Below are other key statistics included in RSAR’s November 2021 report:

Go to rsar.net/market-monitors for the full November report from RSAR, which compiles data based on information derived from the Northern Nevada Regional MLS.

Across the region, median home prices continue to be up and down heading into the holidays. Here are updated statistics, according to the Sierra Nevada Realtors association’s November 2021 report, for other markets:


Go to sierranevadarealtors.org/market-data to read more.