‘There are deals still happening’ 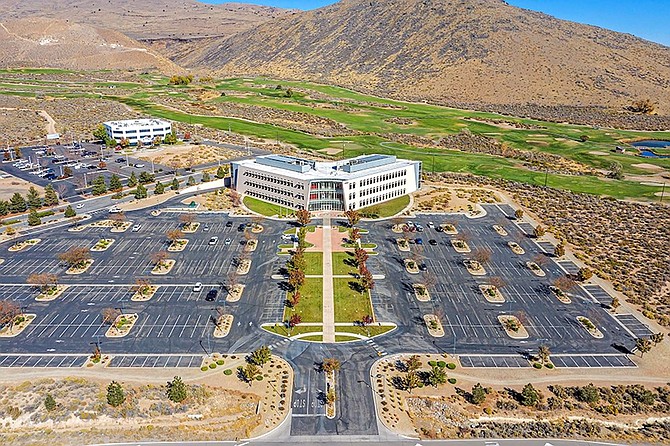 The fact that the ongoing pandemic has disrupted the role of traditional office space in the workforce is no secret by now.
The work-from-home trend shows no signs of ending, either, as office workers en masse eschew commutes and cubicles for home offices, increased family time and a healthier work-life balance.
Those factors are primary reasons why International Game Technology (IGT) made the decision to list its sprawling 1.2 million square foot campus for lease with Colliers International at the beginning of January
Five years ago, in January 2016, IGT divested its 610,410-square foot Las Vegas campus on 38 acres to Panattoni Development for $75 million.
Phil O'Shaughnessy, IGT’s vice president of global communications, trade shows and corporate social responsibility, told the NNBW in written statements that the ongoing pandemic created opportunities for IGT to introduce different work environments and implement more flexible time schedules for its Reno employees.
As a result, the company no longer needs its massive campus to maintain current productivity levels and meet customer needs.
IGT hasn’t yet made a final decision about vacating the Reno campus altogether, but rather is entertaining offers from companies that may want to sublease all or part of the campus, O'Shaughnessy added.
And what a campus it is.
IGT’s Reno operations span seven buildings totaling more than 1.2 million square feet of office, warehouse and distribution space spread across 78 acres. In detail:

• Buildings A, B and C are Class A office space totaling just under 300,000 square feet.

• Building D is just under 800,000 square feet and is a mix of office and warehouse space.

• Buildings F was used as a cafeteria and gym, while building G was a privately run childcare center.

IGT plans to remain in Reno with operations fully intact and moving all or part of its workforce out of the South Meadows facility won’t result in a reduction in workforce, O'Shaughnessy said.
“By entertaining offers for occupancy of either the partial or entire campus, IGT maximizes the opportunity for large or small companies to either enhance their existing Reno operations or to move their operations and associated jobs to the attractive business climate that Reno offers,” he added.
Melissa Molyneaux, managing broker for the Reno office of Colliers International, said the IGT listing provides a golden opportunity for new businesses looking at Reno to enter the market.
“This is a rare opportunity to get into a building quickly — it doesn't need to be built, and IGT put so much infrastructure into that building; it’s fully loaded,” Molyneaux told the NNBW.
IGT will allow interested parties to subdivide space into minimum chunks of 100,000 square feet, she added.
‘Space requirements have changed’
Another large shift in the regional office market comes from Harley Davidson in Carson City, which divested its 100,000 square-foot, three-story office building on Arrowhead Drive for a smaller footprint in the Reno market.
The building housed Harley Davidson’s financial services center and opened in 2004.
A company spokesman said in a written statement the move was a direct result of increased work-from-home capabilities.
“Space requirements have changed,” he said. “The company sold its Carson City facility and plans to relocate to a more appropriately sized facility in the greater Reno area.”
The listings come at a time when there’s a dearth of Class A office space across Northern Nevada — and as vacancy continues to rise.
Overall vacancy in the third quarter of 2020 ticked up more than a full point from the prior quarter to 10.8 percent, Colliers International reported. The office market also had negative net absorption of more than 108,000 square feet in the third quarter.
However, CBRE this month reported positive net absorption of more than 41,000 square feet in the fourth quarter, with average vacancy dropping slightly to 10.7 percent.
With the pandemic disrupting corporate office leasing activity, 2020 would seem like a dark year, Molyneaux said. Indeed, from March to June, she gave just one site tour. However, there’s been a flurry of activity from public-facing businesses such as title and insurance companies and the like that require in-person contact with customers.
“We are very busy with businesses that deal with the public or have clients that need to come in (to an office),” Molyneaux said. “There are deals still happening, and as more people move here, those kinds of businesses will remain busy. So, on one hand we are dead, but on the other we are really busy.”
Buyers beginning to assume more risk with shorter leases
Investment activity also is on the rise across Northern Nevada. Noteworthy office sales late last year include:

Sales are expected to continue throughout 2021, Molyneaux added, as investors divest properties in California and elsewhere in search of a less onerous tax and regulatory climate.
“In October, it was mostly people coming out of California and selling their buildings there,” she said. “They are moving here and also want to move their money here, so we are seeing a lot of investment sales.”
The challenge, she added, is that there’s not much to offer to potential buyers, especially for 1031 exchange buyers seeking replacement properties similar in value to their divested assets.
As a result, investment buyers are beginning to assume a bit more risk by taking on properties with shorter leases, she said.
Despite its ongoing difficulties, the Northern Nevada office market will endure, Molyneaux said.
“Office space is not going away, and at the end of this (pandemic), most people will want an office,” she said. “That’s why you haven’t seen a mass exodus of (companies) giving office space back. Culture, innovation, collaboration, teamwork, it’s all just so much better in an office.
“Will it look different? Yes. People will probably work part-time from home or stagger their days in the office; that may be something that lasts.”