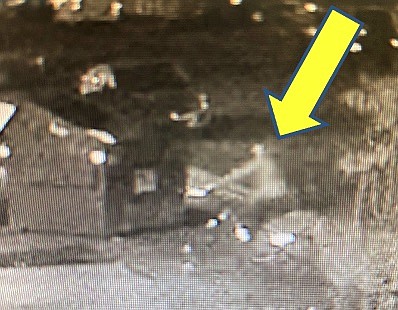 The Carson City Sheriff’s Office is requesting assistance with any information leading to the identification of a person responsible for the attempted sexual assault of a minor.
On Monday, at about 5:40 a.m. an 11-Year-old girl awoke to a man kneeling next to her bed, touching her.  Once the child woke up, the suspect fled from the apartment.  The suspect was described as: white adult male in his late 20s to late 30s.
He is described as 5-foot 8-inches to 5-foot 10-inches tall. He had brown hair, long enough to stick out from below the rim of a baseball hat he was wearing. He also had “pointy” eyebrows, stubble facial hair and a large nose.
He was wearing a black baseball hat, a navy blue sweatshirt, a black surgical mask and possibly a backpack.
During the investigation, video footage of a man matching the suspect’s description was recorded as he left the area of the assault.  The person of interest was on a mountain bike and was last seen traveling southbound on Carson Street, passing the Carson City Inn at about 5:53 a.m.
He was seen on an infrared surveillance camera in the area of the assault.  It is for reference only due to the poor quality.
If you have access to or own any video surveillance cameras in the area of 400 W. Winnie, or Winnie Lane and North Carson Street heading South, please review your video footage for Monday  between the hours of 5-6 a.m. for anyone matching our suspect description.
Anyone with information is encouraged to contact the Carson City Sheriff’s Office, Dispatch (775) 887-2008, Investigation Division, Detective Kevin Murry (775) 283-7853, Sergeant Craig Lowe (775) 283-7815, Lieutenant Daniel Gonzales at (775) 283-7850, or Secret Witness (775) 322-4900.