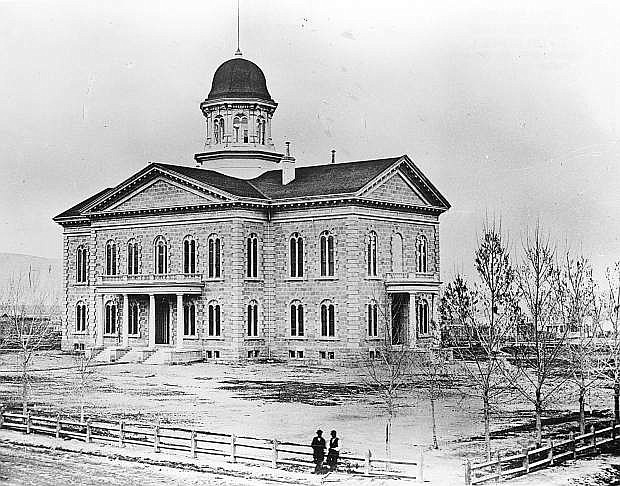 The Prison Board held no session yesterday. They waited on Mr. De Long. Today we believe it is proposed to proceed with the examination of witnesses whether Mr. DeLong puts in appearance or not. Mr. Clayton, bookkeeper at the Prison, is the next witness we understand.

At Washoe Lake yesterday, several hundred pounds of perch were blown ashore by the high wind.

The Appeal is in recent of the Patterson’s report of the Insane Asylum. It shows the institution to be in excellent condition. Never any management has the Asylum run so smoothly as during the past two years.

Last night close to the midnight hour the citizens of this city were roused by the fire bells. The fire laddies resounded promptly to find that the home of District Attorney Sanford was being consumed by fire. The boys took the first cart to the main hydrant only to find that they didn’t have sufficient hose and a second trip had to be made.

“Frank Lee, who was taken to Los Angeles last week to be placed under the care of a specialist, is reported to be slowly improving.” Lee had been allegedly beaten at the hands of the principal of the Las Vegas school. According to the school, Frank Lee had been punished by Mr. Stewart in the presence of the teacher and students and administered 20 lashes below the knees. He attended the school that day and the next. On the Friday Frank complained of feeling bad and a paralysis developed in his legs. It is believed injury to the boy’s spine came from playing a game called “long horse.”

We have nothing to take back of what we said about the mud in these streets of ours. In fact we feel like exhibiting an increased heat and vehemence. It is sticky, oozy, black and surcharged with all manner of debris and rinsing — a vile and vicious mud, and as vast and voluminous as vile.

Cutting Affray. Last evening about 11 o’clock George Cahill was stabbed in the back by Fred Brault, who was intoxicated. Cahill has endeavoring to take Brault home. Brault was arrested. Dr. Guion dressed the wound which he pronounced dangerous.

Last night in the Assembly some thing like an hour was taken up in discussing a bill that would make it unlawful for a barber to open his shop on Sunday. To “man with a hoe” it makes no difference, as he can’t his old safety in action and rake off his tules, but to those who cannot handle the safety or automatic razor, there would be a hardship. After plenty of discussion, the bill was indefinitely postponed.

The Carson high school basketball team defeated the Tonopah team in the play held last night in the southern down, by a score of 30 to 15. The boys are expected in Reno this evening to meet the Reno Hi team.

The system of fire plugs now being introduced is to be gradually extended. Already arrangements have been made for the placing of one or two in the streets west of Carson Street, and it is hoped that the Board of Town Trustees will see the wisdom of scattering these protectors throughout all parts of the city.

To the Public. Mr. Cromwell who is selling tamales on the street, claims that they were made by me. This is not so. I make chicken tamales only and never use 12 year-old roosters or jack rabbits. Mrs. Coronoado.

King’s Daughter’s Sale. This society will have a sale of fancy work and serve a supper on the afternoon and evening of Wednesday, March 6, in Odd Fellow’s Hall. Anyone wishing to make any article for the fancy work table or donate anything toward the supper will greatly aid the society.

The fire at District Attorney Sanford’s home Thursday evening made a complete clean-out of the attorney’s worldly goods. Mr. Sanford and his wife and baby failed to recovery sufficient clothing to dress. Mr. Sanford states that he has been cleaned before but this was absolutely the cleaning of his life.

Hookey. A number of our boys and girls gave in to the spring fever and were absent without legitimate excuses last Friday, and as a result they are making up time at recess and after school. A few might have gotten away with it, but about fifteen were out and they could hardly hope to escape unnoticed.