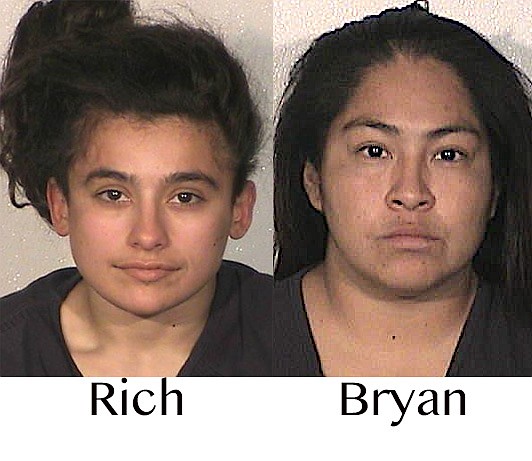 A pursuit of a Ford Explorer reported stolen on Wednesday morning resulted in the arrest of an Arizona woman might be linked to a felony car stop on Johnson Lane from Monday morning.

Destiny Rich, 27, was arrested after deputies spotted the stolen green Explorer, which had been reported taken earlier in the morning.

Rich reportedly led deputies on a chase from the Walmart onto Highway 395 south up Jake’s Hill to Leviathan Mine Road, where she tried to make a turn and was stopped by a deputy bumping the Explorer.

Several items were found inside the Explorer including a hand-drawn map of Tillman Lane in the Gardnerville Ranchos. Rich is scheduled to appear in East Fork Justice Court on Friday.

Carson City resident Yvette Bryan, 29, and her fiancé Arthur Porter, 32, were taken into custody on Monday morning after a felony car stop.

A white Dodge Challenger was spotted speeding by traffic deputy at around 8:15 a.m. Monday on Highway 395 about two miles south of Indian Hills.

According to court documents as the deputy attempted to catch up, the Dodge had ducked between two other vehicles and slowed down. The deputy ran the license plate, which returned stolen.

The driver of the Challenger turned onto Johnson Lane where and pulled over after the deputy activated his lights.

Because the vehicle was stolen and the driver appeared to be trying to elude the deputy, he drew his weapon and ordered the couple out of the vehicle one at a time.

Bryan appeared in East Fork Justice Court on Wednesday. As of Tuesday, no charges had been filed against Porter in court.

Bryan reportedly told the deputy that she borrowed the Challenger from her mother’s friend on Sunday night.

According to East Fork Justice Court, prosecutors have charged Bryan with felony possession of a stolen vehicle, gross misdemeanor child endangerment, driving without a license or insurance.

She appeared in East Fork Justice Court on Wednesday where attorney Maria Pence was appointed to represent her.

Bryan was released on her own recognizance pending a March 17 hearing.
The owner of the Challenger lives in Mesa, Ariz., according to court documents.

Douglas County investigators believe that all three are involved in a theft ring that targeted vehicles.

The Douglas County Sheriff’s Office is asking anyone who may have seen Bryan, Porter or Rich or who may have thought their vehicle may have been broken into or tampered with, to contact Sgt. Jon Storke in the Investigation Division at 782-9905.